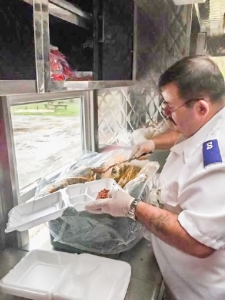 JACKSON, MS (March 12, 2016) –The Salvation Army of Alabama, Louisiana, and Mississippi has increased the number of Salvation Army Corps serving in areas affected by flooding from five to eight because of local needs to the rising flood waters.
Two Corps located in Mississippi and one in New Orleans mobilized today to support disaster response and relief efforts in Hattiesburg (MS), Tangipahoa Parish (LA), and St. Tammany Parish (LA). The Corps are based out of McComb and Hattiesburg, Mississippi and New Orleans, Louisiana.

The McComb (MS) Corps has served 315 snacks and 200 drinks at a shelter located at Eagle Crest Church in the town of Ticfaw, La. (Tangipahoa Parish). “Although we are based in Mississippi the parish is in our service area.” said Captain Andy Bailey, McComb Corps officer. “We are pleased with the partnership that exists in this community allowing the opportunity to provide disaster relief to citizens now and in the future.”

Relief efforts continue to be provided by the Baton Rouge, New Orleans, Shreveport and Monroe Corps in devastated areas of Louisiana. Staff and volunteers are serving meals and drinks to those who are displaced from flood waters and first responders helping keep the public safe.

The Monroe Salvation Army served 300 meals so far Saturday not to mention drinks and clean up kits, plus provided emotional and spiritual care to those who requested it.

“Monetary donations are always eagerly accepted, especially in emergency situations,” said Major Ed Binnix, Shreveport Corps Commander, “The monetary donations allow us to stimulate the local economy which has been impacted by the disaster and enable us to purchase what we need when we need it.”

In Mississippi, the Greenville Corps continues to provide meals and hydration to a shelter located at the Washington County Convention Center. The Jackson MS Corps  continues to provide four volunteers, and two mobile canteens to support disaster relief efforts in Monroe, Louisiana.

The Salvation Army in several other locations is also on standby due to National Weather Service concern with current river stages and the affect the flooding could have in the future.

“We are ready to respond should flooding expand to other areas,” said Terry Lightheart, Emergency/Disaster Services Director, The Salvation Army of Alabama, Louisiana, Mississippi. “This is a threat that could last for several more days.”

The Salvation Army asks people who want to help those affected by these storms to please give monetarily through this link: http://give.salvationarmyusa.org/march2016floods

Salvation Army disaster services are free. All people are served equally, without discrimination.

About The Salvation Army
The Salvation Army, an evangelical part of the universal Christian church established in London in 1865, has been supporting those in need in His name without discrimination for more than 130 years in the United States. Nearly 30 million Americans receive assistance from The Salvation Army each year through the broadest array of social services that range from providing food for the hungry, relief for disaster victims, assistance for the disabled, outreach to the elderly and ill, clothing and shelter to the homeless and opportunities for underprivileged children. 82 cents of every dollar The Salvation Army spends is used to support those services in 5,000 communities nationwide. For more information, go to www.salvationarmyalm.org.

Volunteers and employees after passing out food bags

The Anniston Salvation Army is housed in a former Coca Cola Bottling building. You can see the old Coca Cola sign on the left.

Being a parent of five children, I often hear the statement, “that’s not fair.” Usually, those three words come from a child who feels his or her parents purposely jobbed them out of getting the most awesome piece of candy ever created or the toy of all toys made by Santa himself.  They’re really dramatic about it too.

In another example, a friend’s parents bought them a scooter and it just wouldn’t be fair if I didn’t get a scooter also or so they’d say. Our reaction is the same…yes, Braden, Will, Olivia, Thomas, Lillian (I’m sure the order here has the youngest two yelling, “How come I can’t be first? That’s not fair!”) life is not fair and you don’t always get what you want.

I can imagine our heavenly father’s response to us would be the same. After all, God promises to take care of us, not necessarily that all will be fair throughout our lives.

These examples entered my mind as I left the Anniston Corps of The Salvation Army.  I visited with Captains Bert and Christy Lind for a couple days to figure out how we could garner more attention for the work they and a handful of dedicated employees and volunteers are doing.

You see, if there was ever a reason to cry “not fair”, it’s in Anniston right now. The Corps is housed in an old Coca Cola bottling plant, and when I say old, I mean 1926 old. The problems at the moment include a roof repair that will cost thousands and some old pipes that don’t like the cold weather.

This isn’t to say the facilities are inadequate. Walking around the grounds you can see just how much space the Anniston Corps has to work with…and work is not something the Linds or their workers shy away from.

Walking into the building for the first time, I was greeted by an employee helping a family wheel out groceries that will help them through the weeks ahead. The colder temperatures called for a warming station to be opened so the area homeless could get out of the dangerous weather. A volunteer mans the warming station to help those who come inside. (I counted at least fifteen who’d come in out of the cold when I was there). On that same day, volunteers gathered to go pass out food bags to the needy in town, and that doesn’t even speak of the busy Family Store on campus.

I’m definitely not writing this to make you feel sorry for these faithful officers, soldiers and employees, but rather the opposite. You see, these folks will spread the Gospel of Jesus Christ no matter what their building looks like and no matter what it becomes in the future. In fact, the Captains aren’t ones to talk about their accomplishments.

I’m not sure about this because I never ask Captain Lind, but if I had to guess, my guess is he subscribes to the motto: “Let go, and let God.” So, the Linds will keep working, they’ll keep serving, and they will keep sharing the Word of God. One thing you won’t get from them though is a lot of complaining. They know who’s in control.