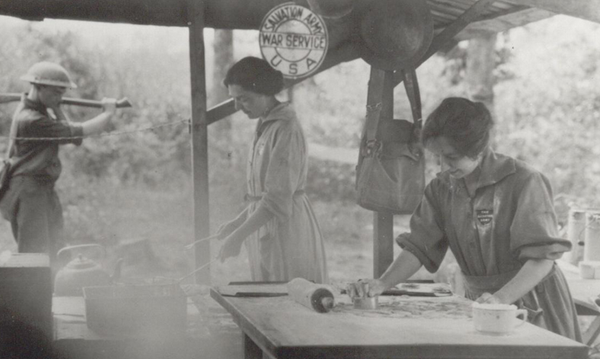 National Donut Day started in 1938 in Chicago as a tribute to The Salvation Army “Doughnut Lassies” who supported our troops during World War I. About 250 volunteers traveled overseas and set up small huts located near the front lines where they could give soldiers clothes, supplies and, of course, baked goods.

After discovering that serving baked goods would be difficult considering the conditions of the huts and the limited rations, two volunteers – Ensign Margaret Sheldon and Adjutant Helen Purviance – began frying donuts in soldiers’ helmets. These tasty treats boosted morale and won the hearts of many soldiers.

The Origination of “Doughboys”

Nicknamed “Donut Lassies,” the women who served donuts to troops are often credited with popularizing the donut in the United States when the troops (nicknamed “Doughboys”) returned home from war. During WWI, Donut Lassies served coffee and donuts to soldiers in the trenches. Salvation Army workers supported our soldiers with spiritual and emotional aid and were a welcoming connection with home and family.

Celebrate National Donut Day by trying out the recipe below!

A RECIPE FROM THE FRONT LINES

DIRECTIONS
Combine all ingredients (except for lard) to make dough.

Thoroughly knead dough, roll smooth, and cut into rings that are less than 1/4 inch thick.

Drop the rings into the lard, making sure the fat is hot enough to brown the donuts gradually. Turn the donuts slowly several times.

The Salvation Army Across Alabama, Louisiana and Mississippi Activates Response...
Scroll to top