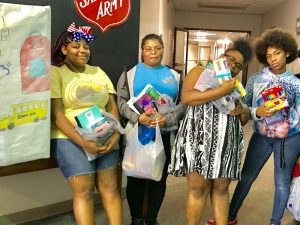 LaCreata Scott came to The Salvation Army shelter in Shreveport, Louisiana for much the same reason that most people in need look for help. She had nowhere else to go. With three daughters, and without a place of her own, her options were limited. “I was a resident in the shelter for about two weeks with my children. They were able to stay in the day care as well,” says LaCreata, “I felt like this was a safe place,” she says. It was a chance for her to breathe. It was a chance for her to try and make a better life for her family.

For LaCreata and for all of those families that find themselves without a place to live, The Salvation Army is not simply a place to stay. It is a place where they can find opportunities to change their life and that of their family. Last year The Salvation Army of Shreveport provided nearly 7,000 nights of shelter to families and individuals in need. In that same time, over 3,000 found assistance with basic social services.

LaCreata has been in her own home since 2006. But her experience with The Salvation Army led her to want to serve others. “Whenever they call me, I am there to help,” LaCreata says.  She has helped served meals to other people in her own neighborhood. And she eventually joined the church, becoming a solider in The Salvation Army. “I feel like they just took me in. I feel like this was another home for me,” she says.

A Donation of Transportation
Scroll to top