A sweet treat can bring a smile to your face, but it’s even sweeter when it can do good for those around you! In 1938, while the Great Depression saw 12 million Americans facing unemployment, The Salvation Army held the inaugural Donut Day event in Chicago as a fundraiser to help those in need. The event served to commemorate the “Donut Lassies,” Salvation Army volunteers who made and delivered donuts to the troops during World War I. 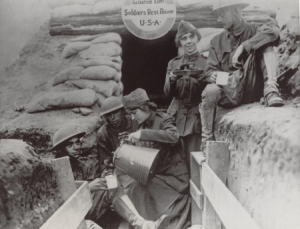 In 1917, The Salvation Army sent about 250 volunteers on a mission to provide spiritual and emotional support for U.S. soldiers fighting in France. These women became known as “Donut Lassies” because of the many donuts they fried and served to soldiers from small huts near the front lines. The Donut Lassies are often credited with popularizing the donut in the United States when the troops (nicknamed “Doughboys”) returned home from war. The donut became a symbol of comfort for Americans that endures to this day.

National Donut Day is held annually on the first Friday in June, and The Salvation Army celebrates the work of the original Donut Lassies by delivering donuts to those in need and to donut lovers across the country. Donuts and National Donut Day are part of a legacy of American goodwill, home comfort, and tradition that is celebrated every year with these sweet treats. But, of course, the calories don’t count on Donut Day while you’re helping to do the most good!