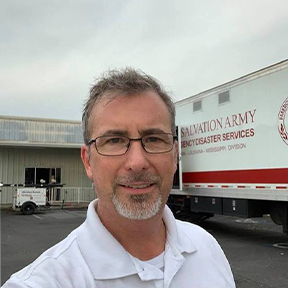 Disasters are both unpredictable and unrelenting; however, The Salvation Army is steadfast in fulfilling its long-standing commitment to help those who find themselves in need following a natural disaster.  One of the practical ways that The Salvation Army provides assistance following a disaster is by sending well-trained, prepared personnel to the affected area for a two-week deployment. Major Bret McElroy, Corps Officer/Pastor of The Salvation Army 614 Corps (church), was part of the initial response team sent to Lake Charles, LA to assist with the disaster efforts immediately following Hurricane Laura. “As a Salvation Army Officer, it is part of our service to God and humanity to respond immediately when called upon to serve following a natural disaster, so I was ready to go as soon as I knew about the hurricane,” stated Major Bret.

The Army’s established, well-rehearsed emergency protocol allows for efficient service to first responders, as well as those directly impacted by the event.  “This was the first time I served on the initial response team tasked with setting up an incident command center,” stated Major McElroy, “When I arrived, the entire area was without power and water.  The incident command team spent the first night on cots at the Lake Charles Salvation Army corps building, which had sustained damage itself.” His first few days on site were spent cleaning and organizing a warehouse designated for receiving and dispersing supplies to those affected in the Lake Charles area.

“Hurricane Laura left behind a large path of destruction, but the resilience of its victims was incredible.  It was a powerful experience to be the hands and feet of Christ as we brought hope through practical assistance and spiritual support,” Major McElroy recalled.  “Every day I saw God answering the prayers of His people through the selflessness and generosity of donors and workers alike.” 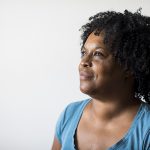 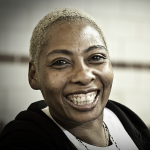