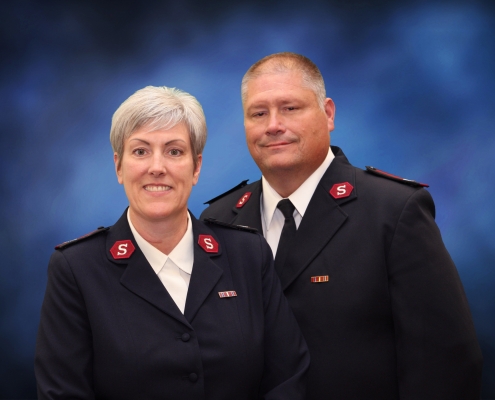 Majors Robert and Karen Lyle were appointed to lead The Greater Birmingham Area Command in June of 2021. Major Robert Lyle grew up in Paris, Texas and was introduced to The Salvation Army through an act of kindness when The Salvation Army volunteers delivered a food box to his home. Major Robert said it was this type of “ministry” that inspires his lifetime commitment to serving others. “I do now what was done for me as a kid,” said Major Robert Lyle. Major Karen Lyle was born and raised in the port town of Oswego, New York, and is the sixth of seven siblings.

Major Karen is an avid student of the Word and committed to fulfilling a promise she made to the Lord more than 30 years ago. Major Robert Lyle serves The Greater Birmingham Area Command alongside his wife of 33 years, Major Karen Lyle. The Majors have served The Salvation Army for 30 years, and willingly and dutifully have accepted appointments in cities such as Baltimore and Hagerstown, Maryland and most recently Jackson, Mississippi. Birmingham makes the 10th appointment for Majors Robert and Karen Lyle. In addition to serving as Area Commanders, the Majors also serve as pastors of the Alabaster Community Corps Church. “My greatest reward is seeing souls come to Christ,” said Major Robert Lyle. Major Robert Lyle said his goal is to continue to grow the Alabaster Community Corps Church, The Center of Hope, and provide resources for people to come in and experience the love of God. “I would rather see a sermon lived than preached every day,” said Major Robert Lyle.

Majors Robert and Karen Lyle possess Bachelor of Arts in Christian Leadership and Master of Arts in Organizational Leadership. Major Robert Lyle is presently pursuing a Master of Divinity. They are the parents of two sons, Josh (Jordan) and Caleb (Kristen), and grandparents to four beautiful grandchildren, Lilly (6), Noah (4) Micah (2), and Ella.