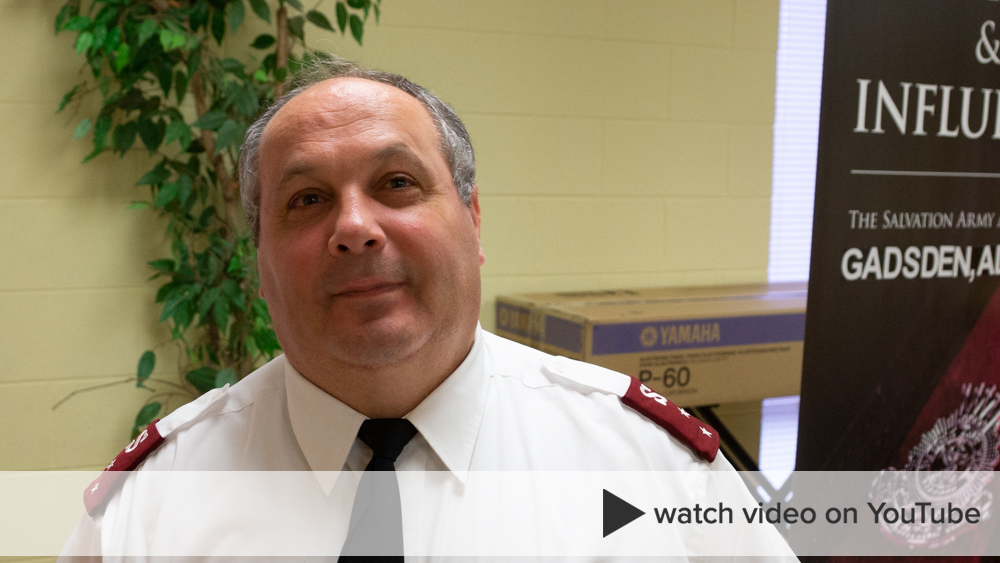 Where does your dollar go? For over 120 years The Salvation Army has had bell ringers outside during the Christmas season, collecting donations in our iconic red kettles. During this season it’s not hard to imagine a hungry child or struggling family receiving food and shelter thanks to the community’s support. But that’s not where it ends. Read on to learn how one small town in Alabama benefits from the community’s support of The Salvation Army.

No Place To Call Home

Homelessness is a hard life, and it touches communities big and small. Even in a small town like Gadsden, Alabama, there are those who have no place to call home. And it is the community that is helping them, though their donations to The Salvation Army. “We’re lodging an average of 10-15 (people) a night. Getting them off the street,” says Captain Dennis Hayes, the Gadsden Salvation Army Corps Officer. Those needs are often more acute at Christmas, but they do not end after December. Thankfully, the red kettle donations help to fund the work of The Salvation Army year-round. “We average around 45-50 people a year, helping them get out of homelessness,” Captain Hayes says.

Those in need are not always homeless. Holiday meals can stretch an already thin budget, and those struggling to make a living often find themselves without enough money for food. Attending to the needs of the community remains a year-round mission for The Salvation Army. “We feed several thousand people year. Not all of them are homeless but they are low income and the money just doesn’t go far enough for food,” says Captain Hayes.

And hot meals are not the only way to serve. Recently, the Gadsden Corps began a program that can help people continue to make meals in their own homes. “We just now started our senior food program. They come in once a month to pick up a prepackaged box of food,” says Vermelle Bonfanti, Social Service Case Worker for The Salvation Army of Gadsden.

But again, food is not the only need. The community helps keep the lights on for those in need with Project SHARE, which is funded by Alabama Power customers who donate through their monthly electric bills. “On your bill, when you pay your bill it asks, ‘would you like to donate to the SHARE program’ and that’s where that money comes from,” says Bonfanti. These funds allow The Salvation Army to directly aid those in need. “We gave out $8,000 worth of money this year to people who needed help with their power bills as well as gas,” says Bonfanti.

The money that’s placed in the red kettle is only one avenue for giving, but those resources are part of The Salvation Army’s mission to do the most good in the communities we serve all year long. Donations to our kettles help provide meals, supplemented with donations of food. They help provide services, supplemented by the aid of volunteers. “On top of that, we also give spiritual and emotional care,” says Captain Hayes, “if we can’t do anything but listen we try to do that. We’re there to help them, so that‘s a part of what we do for the community, we try to make it a better place to live.”

You can help by donating to our kettles in person, and now you can also give to our online red kettle here: Online Red Kettle